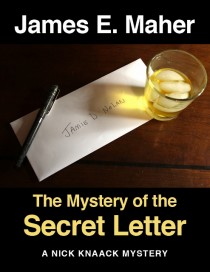 Nicholas (Nick) Knaack is a private investigator living and working in Albuquerque, New Mexico. An attorney in Albuquerque, who Nick has worked with in the past, offers him an unusual assignment. The attorney has a document that was given to him by a client before the man died.

The document writer’s identity and the contents of the document must be kept secret from everyone except the intended recipient. The challenge is that the only information about the person that the attorney is looking for is the name Jamie D. Nolan, and a possible starting point to find him or her, or to prove that he or she has died. That starting point is the Florida panhandle.

What appears to be a sufficient amount of money has been set aside by the deceased to cover searching for Jamie Nolan for about two years. It’s an almost impossible task but Nick agrees to the assignment out of friendship for the attorney.

The critical question is where to begin. The search takes Nick back to the Vietnam War, the East Coast, and eventually to Florida where he thinks that he may have a lead but cannot be sure. The person he thinks may be Nolan does not have any history prior to 1986. Will Nick find Nolan? Is Nolan alive? What does the document contain that’s so important to the deceased man? Learning the contents of the document and what happened before 1986 becomes an obsession for Nick as he investigates the case, even though neither is a requirement of his assignment. What he finds is completely unexpected.